On Saturday, the Canadian women’s national football team will play a quarter-finals match against England in the 2015 Women’s World Cup. At this stage in the tournament, it’s do or die. Either Canada wins and advances or they lose and their World Cup journey ends.

To say I am both incredibly nervous and excited is an understatement.

Since Canada played England in a friendly match on May 29th, this team and this tournament has kind of dominated my life. But I feel like I’m having the best summer I’ve had in years because of it. It’s difficult to articulate how emotionally invested I’ve become because this has never happened to me before. As a kid I was a total jock but as an adult, I’m a pretty casual sportsfan. I 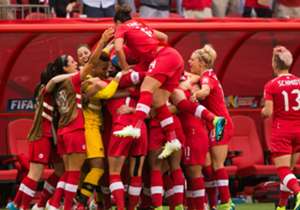 watch the Olympics every two years and will casually catch football or rugby or hockey games depending on what’s on TV, but there are no leagues or teams I follow religiously. Right now, however, I’m fully obsessed and already grieving that as of July 5th I won’t have near-daily international women’s football in my life.

That said, I’m loving it while it lasts and I wanted to put it down in writing that hey, Canadian women’s national team — I’m proud as hell of you! Thank you for being you! I can’t imagine a finer group of women and athletes representing our country. It’s pretty clear to anyone with sight that they’ve worked their asses off to get as far as they have at the international stage and that they genuinely care about football, about each other and about winning for Canada. I’ve enjoyed watching them play on and off the field (thanks to social media) and honestly feel that they’ve made themselves open and available to their fans. These games are not played for money (for there is little of that to go around in women’s football); they’re played with heart. And I think that’s why I’ve become so attached and invested; I don’t think I’ve ever seen sports played with this much heart, out of this much sheer love, in my entire life. 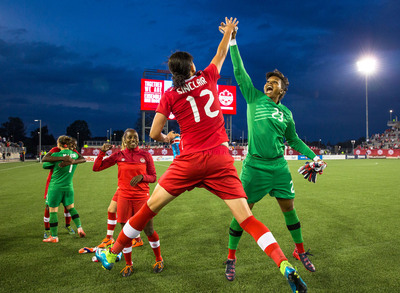 To me, personally, there’s nothing better in this world than women who exist to make each other’s lives better. Who encourage and support and just plain enjoy the shit out of each other. There. Is. Nothing. Better. And to me, while this team represents many things, it represents that above everything else and I’m so grateful that this tournament is giving girls and women not just across Canada, but the globe, an opportunity to share in that.

Lou, Jess and I have been watching the Canada matches together so in our case, this team has literally brought us together, has literally rallied support from women, for women. We’re just fans sitting at home shouting at our televisions, but we’ve been brought along on this ride and we’re not ready for it to end until Canada holds that World Cup trophy high. I can hardly help but be sentimental and I absolutely don’t care how silly that may seem to anyone who doesn’t care about women’s football, or women’s sports in general.

No matter what happens in this match against England or any match thereafter, I am proud of this team. They’ve worked their

asses off and they’ve invited their fans to be part of their success. They’ve always conducted themselves with class and humility. They’ve given everything they have to this game and this team with relatively little reward or recognition (compared to men’s teams) and I am so thankful. They’re changing the landscape of women’s sports and if all I have to offer is my unbridled support, well, it’s theirs to take.

(If this video doesn’t make you fall in love with the Canadian women’s national football team, nothing will)

Published by For Kicks

We're Jessica and Katie, a couple of pals who are deeply passionate about women's soccer, and For Kicks is a podcast dedicated to celebrating the Canadian WNT. View all posts by For Kicks

A podcast following the CANWNT, CANW20, CANW17, plus NWSL and other women's soccer news!